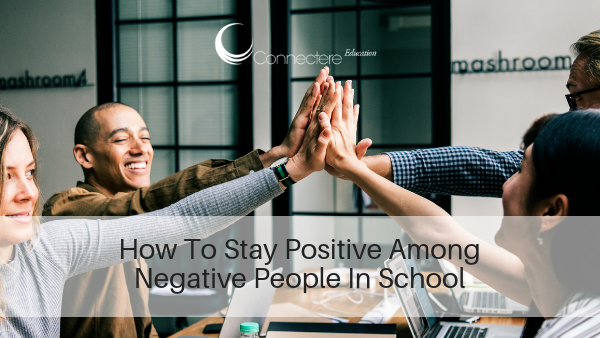 Negative people and peers in school can be exhausting and often ruin the atmosphere of positive learning and social gatherings. While most people have the occasional negative thought, some people seem to thrive on bringing other people down. Learning to deal with these people effectively reduces the impact of their negativity on your school life.

Awareness is the first step to freeing yourself from other people’s negativity. Negative people tend to be overly-focused on the bad things in life, often refusing to see or discounting any positives. Some spend their time judging and criticising people in their own families, social circle or the wider community, while others are continually complaining about their friends, various ailments or the state of the world in general. Negative people tend to see themselves as the victim and are quick to blame other people for their problems.

Recognising negativity is not always easy, as some people are good at hiding their intentions or dressing them up as something different. For example, rather than overtly criticising a teacher for the clothes they wear, some negative people will make “helpful” suggestions on how they can improve their appearance.

Other types of stealth negativity include making derogatory comments that are passed off as a joke or continually asking for help, advice and opinions. While it’s natural to ask for advice at times, some people use this as a way to get attention, while having no intention of using or even considering the advice offered.

The best way to spot stealth negativity is by listening to your own thoughts, feelings and bodily sensations. For example, you may feel defensive and emotionally drained when talking to a particular person. You may also notice your own negative thoughts and a low mood after spending time with them.

The best way to deal with negative people is to avoid them or spend as little time as necessary in their company, but this is not always possible. Fellow students, teaching staff and hostel mates may be impossible to avoid, so you need to develop a strategy for dealing with them.

In some cases it may be possible to stop the negativity by having an honest discussion with the other person. Many people do not realize how negative they can be and they may even be grateful for your honesty. However, more often than not, negativity comes from deep-rooted and often irrational beliefs. While you cannot change another person’s belief system, you can change the way you respond to them.

Avoid Getting Sucked In

Negative people thrive on other people’s reactions. Offering sympathy for their suffering or agreeing with them when they tell you what a terrible place the world is will only feed their negativity. Similarly, trying to help solve their problems by offering well-meaning suggestions can make the problem worse.

Learning to detach from the other person’s comments, beliefs and personal dramas is a valuable skill that helps to provide a buffer against negativity. However, it can take time and practice to achieve emotional detachment.

Steering the conversation towards more positive topics can sometimes defuse the situation. Neutral topics, such as movies, music or food, can also be useful talking points. However, some people are able to steer the conversation back to negative subjects with relative ease and this battle for positivity can quickly drain your energy.

Planning ahead is important if you know you will be dealing with negative people. Consider different ways that you could deal with negativity, such as changing the subject, challenging the other person’s negative statements or politely making your excuses to leave the conversation.

Setting boundaries is another important part of the planning process, as you need to decide when it’s time to walk away from a conversation.