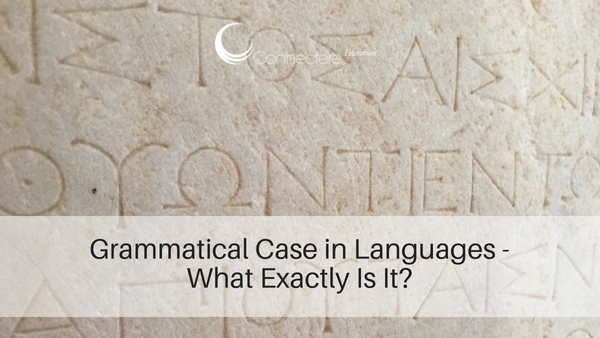 One of the common difficulties that most English speakers have when they start learning certain foreign languages is the presence of a complex case system. Grammatical case can be found in all Slavic and Baltic languages as well as Gemian, Latin and Modern Greek amongst others.

English also has a case system which is widely used in pronouns. For example: “I” is nominative case while “me” is accusative case and “my” is possessive (also known as genitive).

Likewise the apostrophe ‘s’ denotes possessive as well, commonly known as the genitive case when learning a foreign language.

Grammatical case is confusing to many people learning languages such as Russian or German. This is mostly because it is not widely used in English and we do not even know the examples mentioned above as a usage of grammatical case.

In fact, it is highly likely that most people starting out on learning a foreign language do not even know what the word ‘case’ means in this sense.

Grammatical case, to put it as simply as possible, is the way a noun is inflected to denote its function in a sentence. Inflection is a linguistic term referring to the modification of any word to change its function.

Noun case is one of those things that is very important to understand from the earliest stages of learning a language that has a complex case system.

Without knowledge of the more basic cases, you will barely be able to formulate a coherent sentence.

In Indo-European languages, the cases used are for the most part universal. The system is mostly derived from Latin, which has six cases of nouns.

Other languages which have a completely different grammatical makeup to Indo-European languages, such as Hungarian, Basque, Finnish or Georgian, have many more cases which have different functions.

Nominative: The nominative case is the basic form of a noun, making it the subject of a sentence.

Accusative: The accusative case is the subject of the action carried out in the sentence, i.e. the noun directly affected by the verb.

Genitive: Also known as possessive, the genitive is actually widely used in English, denoted by ‘s as in: The man’s dinner.

Dative: The dative is the indirect object of a verb. The dative has additional uses in many languages, though this is the most common use of the case. To summarize, it typically indicates a recipient or beneficiary.

Ablative: The word ‘ablative’ comes from the Latin ‘taken away’. It normally indicates movement away from something. The ablative is most notably referred to in Latin. However, other languages have one or more cases to cover the function of this case in Latin.

Vocative: This case is used when addressing someone or something. It is not used in a proper sentence.

Locative: Locative case is commonly used in many languages to denote the location of something. This is expressed in English by the preposition ‘in’. Though Latin does not have a locative case, it is used today in many European languages.

Cases may seem quite daunting when it comes to learning certain foreign languages. This is especially the case in languages which have more complex grammars closely related to Latin. Many Indo-European languages have between six and eight cases. By contrast, Spanish has absolutely none except in pronouns. German has four cases while its relative, English, has lost almost all of its more complex inflectional grammar. Unfortunately, there is not really any easy way to get used to a complex case system. You need to learn each case at a time and relate it to how it is expressed in English.