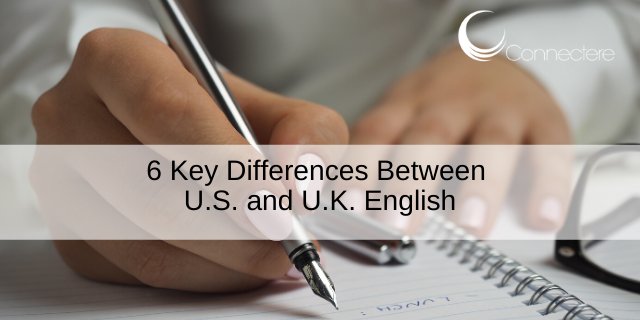 Do you work more with clients who use U.S or U.K. English? Which one is primarily used in your workplace? U.S. and U.K. English differ in a number of respects. You need to be aware that when writing, these differences determine your style in the eyes of readers. The following is a guide to help you identify some of the most common U.S./U.K. variations.

Punctuation in U.S. and U.K. English differs in numerous ways. The following is a summary.

U.S. English prefers to combine a prefix, such as “non,” with the word that follows. For example, “nonnegotiable,” “reentry,” and “preeminent.” U.K. English uses a hyphen between the prefix and the following word. Thus: “non-negotiable,” “re-entry,” and “pre-eminent.” But even in U.S. English, a hyphen is sometimes necessary to ensure that the sense of a word is clear. For example, “anti-intellectual.” If in doubt, consult a dictionary.

U.S. English also uses a double rather than single “l” in words such as “enrollment.”

U.S. and U.K. English are similar languages, but with their own characteristics. The overall sense in both is generally the same; however, the differences matter in business, academia, and other formal environments. Use the foregoing guide to avoid confusion and error.