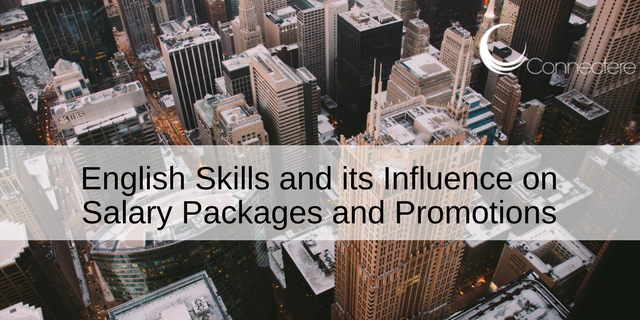 As it turns out, having good English skills could be the key employees need to unlock the next stage of their careers.

Studies have shown that employers in several sectors consistently give better salaries and more promotions to employees with greater English fluency. The Cambridge and Quacquarelli Symonds (QS) study also shows that the salary gap among employees with good English skills and those without is more significant in countries where the English skills gap is more profound. Examples include countries like Brazil, China, Ukraine, and Iraq.

The last three countries have been shown to offer the greatest career benefits to those with better English skills at the start of their careers. Employers who admitted that they would give more benefits to employees with English proficiency were incredibly high in these countries. In the Ukraine, 83% admitted to this; as well as 80% in China and 79% in Iraq.

These countries are not alone in enforcing this trend. Over half of all businesses in non-English speaking countries that were involved in the QS Global Employer study echoed similar sentiments. Basically, the lucky employees can expect a better starting package, faster career progression, a higher salary, and getting assigned better roles.

That is to say that on a global scale, there is an English-skills deficit that has not been met. The study puts the figure at about 40%. The problem does not just affect average businesses, but large companies as well. The issue is also disproportionately affecting certain roles, in particular those that are internal-facing such as Human Resources, Accounting and Finance, Personnel, and Production and Logistics.

The study was quite broad, as it covered 38 countries and a total of 5,373 employers. What was surprising is that the English skills and its influence on salary packages and promotions was also evident in countries where English is not even an official language.

Not surprising, however the English-skills gap was more of a problem in lower management levels, where it stood at 40%. Among the middle and top management, the skills gap fell by nearly a half to just 25%.

There was also a slight difference in the way organisations valued English skills in their employees, with large companies holding this skill in greater importance than their smaller counterparts. The variations in preference for English skills was between 67% and 78%, with the larger enterprises (with more than 2,500 people) having a stronger desire for employees with good English skills.

Some sectors also showed a greater dislike for people with poor English skills. For instance, in Aerospace and defence, 89% of employers considered English to be important. A similarly strong preference for English proficiency was noted in the legal, energy, and telecommunications sectors. An opposite trend was reported in the construction industry where less than half the employers considered English proficiency an important quality in their employees.

The reason why many employers regard English skills so highly has to do with the fact that the language is generally considered to be the language of business, etiquette, innovations, and science. Among all the English proficiency skills in existence, reading is considered the most valuable.

What’s more? Projections indicate that the importance of good English skills will only grow over the next decade. That is because as global business increases, having better English skills will become more important. English is the language of choice when it comes to drafting contracts and writing international journals.

The message to potential employees is that they should make a point of doing an English course in order to develop their English skills. While at it, such employees should take English courses that are internationally recognised.

Additionally, it is important that learners also practice speaking the language, and also remember to work on their English reading and writing skills to give themselves an edge in the job market.